FAQ - How does the COLOUR CODING work?

The first question card to be asked in Round 1 by the Space Investigators is shown below.  You can see both sides of the card.
It is clearly marked as being a red bordered item. The question card also states that the red question flow ends when Dr Callisto has spoken.

Similarly once Aurora has performed her red bordered item, she knows she won't be called upon to speak until the pink bordered question is asked. Likewise for Dr Callisto with the purple items.

All games come with round flowcharts that pictorially depict what will happen in each round. These can be used by the host to keep an eye that everything that happens in a round does happen. Alternatively they can be pinned on the wall, and all players can help to ensure that the round develops as expected.

You can see the flowchart for "Murder in an Hour in Space" below. 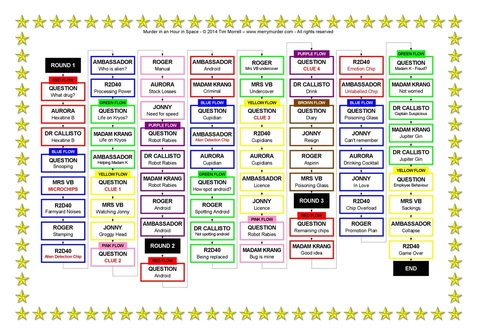